The drive from Lincoln to Colorado (Estes to be exact) wasn’t that big of a deal and we did it all on Saturday.  It’s amazing how flat the eastern part of Colorado is (it seems like no one ever mentions it)- then all of the sudden the mountains pop up out of nowhere and Colorado looks like all the pictures we’ve seen. Seeing the mountains in the distance was awesome- especially since we had been driving on a flat, unchanging landscape for hours, it finally felt like we were getting somewhere.  The first half of our trip was, of course, amazing, but Adam and I both couldn’t help looking at Colorado as sort of a beginning- the start of mountains and hiking and landscape that looks totally foreign to us.

We were completely unprepared for our first night in the beautiful state.  We figured we could easily find a campsite- since there are hundreds- it turns out, however, we completely underestimated Coloradans’ love of the mountains.  Every single campsite was full and we were beginning to worry that we’d have to just pull off to the side of the road and sleep in our car until a cop told us to move- this is made worse by the fact that our car is Completely Full and our seats will in no way recline.  Adam took the reigns and went into the ranger station near Longs Peak and asked the advice of some of the nicest park rangers that ever lived.  They told us about free dispersed camping just down the road- which also happened to be some of the best campsites Adam and I had ever been to (at least without having to sling backpacks on our backs and hike miles to seclusion- this site we drove right up to). We also got to use our hammock for the first time! 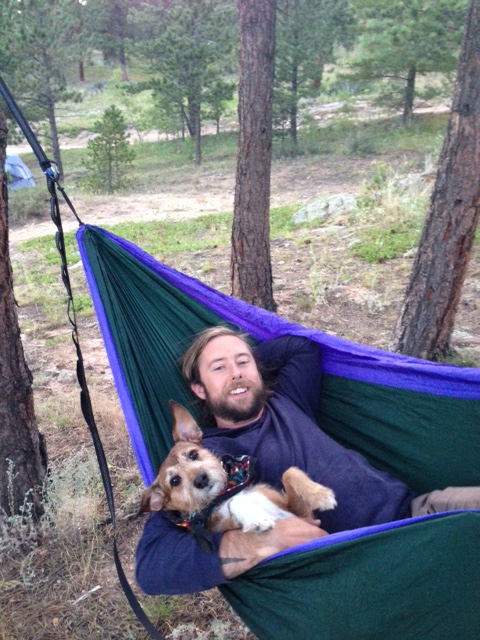 I’m not sure Vera likes it as much as we do…  It was such a great night- the weather was perfect, we saw millions of stars (a cute little kiddo near us exclaimed that there were “30 stars!”), and we didn’t have to pay a dime for our stay.  It was actually hard to pack up camp the next morning and move on to our cabin in Raymond.

We did our first official Colorado Mountain Hike on Sunday morning.  It was a fairly steep incline that lead to a summit with breathtaking views of the Rockies. 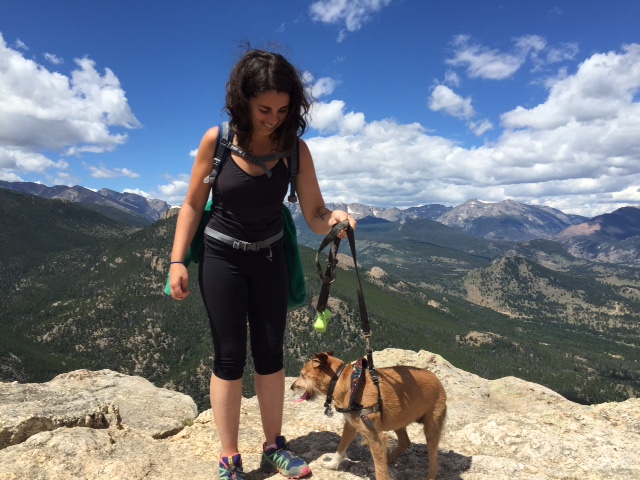 After our hike, we drove out to our tiny, cute little cabin, where we would spend the next couple of days. 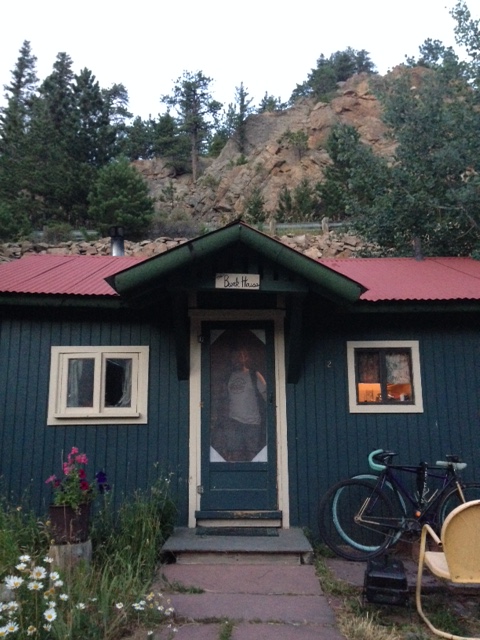 We spent the week hiking, sitting by rivers, running, seeing amazing wildlife (like the giant elk that was 1 foot in front of our car!) and hanging out in Kind Coffee Shop (well, Adam wasn’t exactly hanging out, he was working). 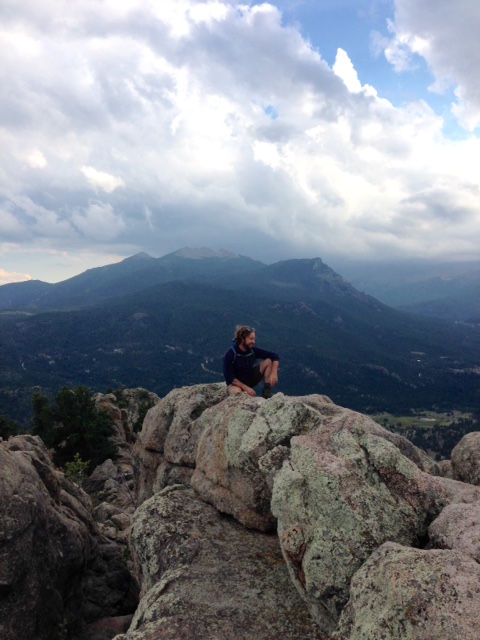 On Thursday and Friday night we camped inside of Rocky Mountain National Park (at Glacier Basin)- it was beautiful, but we were so spoiled from the dispersed camping the first night- this didn’t really compare.  We decided to hike in the park on Saturday so we dropped Vera off at daycare (no dogs allowed in the National Parks)- which, though we missed her, was totally worth it.  The hike that day was amazing, and of course surrounded by snow-capped mountains. 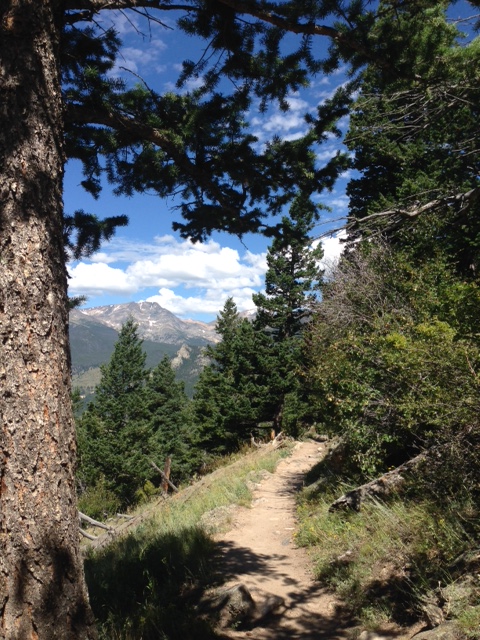 We hiked up Deer Mountain because we knew we wouldn’t have time for any of the bigger hikes since we couldn’t drop Vera off until 8 (one day we’ll come back and do a 14er!)- the afternoon thunderstorms are the real deal and we didn’t want to risk being on an exposed mountain top when one rolled in.

That night we stayed in Boulder and got to eat at Salt thanks to Mom and Dad G.!  It was such a nice treat after cooking on a camp stove for the past week.  On Sunday morning we woke up for a hike in El Dorado that was gorgeous before heading onward to Denver.

Our week in Denver was wonderful! It was, honestly, so, so nice to be back in a city- it definitely helped that we stayed in one of the best houses we’ve ever been in.  Adam went to the 360 idev conference for most of the week, while I cooked, ran through city streets, relished in the number of different languages I heard, took great yoga classes, and enjoyed our awesome little pretend home. 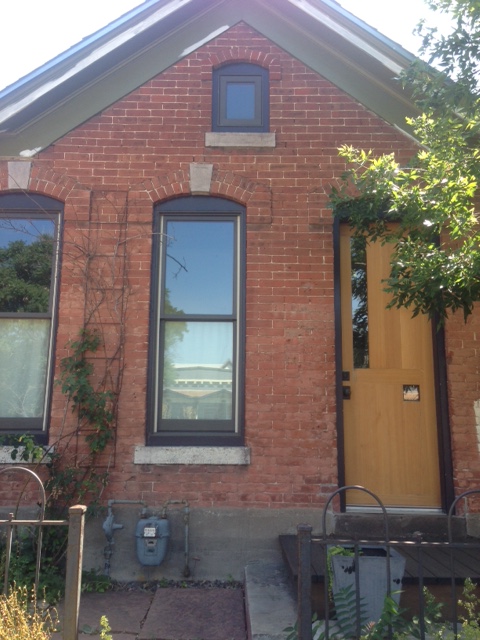 Denver (and being back in a city) would have been awesome on its own, but it was made even better by seeing one of the best people I know- Laura!  It was so nice to see her and hear all about her new life in Colorado.  It’s going to be a strange year not teaching with all of my favorite CCAA people- I miss everyone so much already!

We ended our stint in Colorado by camping in our all-time favorite Colorado Campsite along the Guanella Pass near Georgetown (an old and beautiful gold mining town). 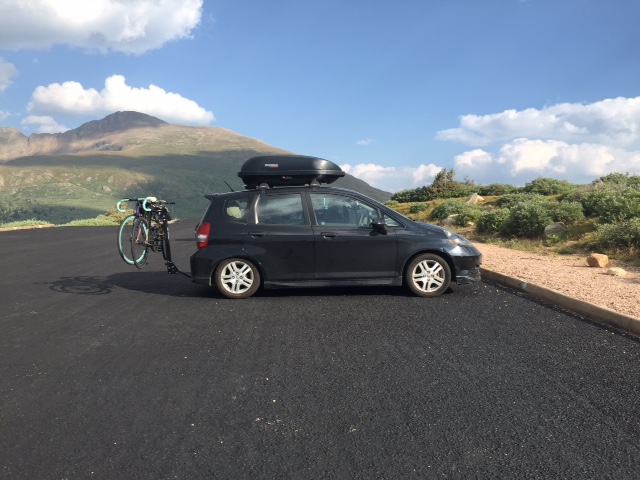 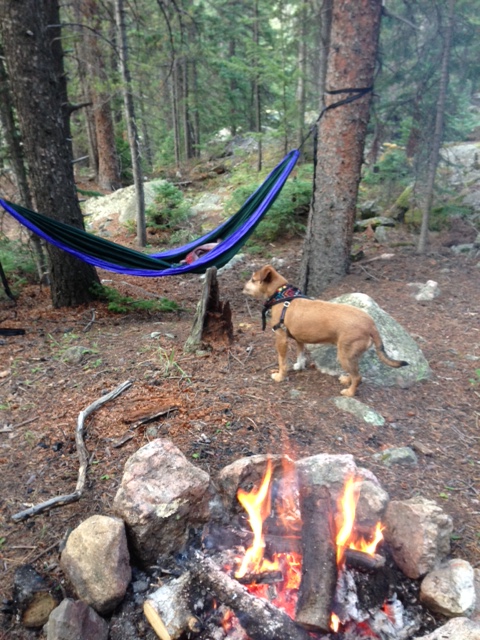 Because of the spill in the Animas River, we had to change our original plans to visit the Grand Canyon and Escalante for the next week.  We decided that since Moab, Utah treated us so well the first time we visited, it wouldn’t be so bad to return- onward to the desert heat!

About five years ago, Adam and I decided that we wanted to visit Asheville, North Carolina.  I’m not sure where this desire came from; I don’t even think we’d met anyone who lived there until years later.  Based on the influx of northerners, it’s possible we were also influenced by some mysterious marketing campaign.  Regardless of the reason, we excitedly decided to book a cabin in the woods somewhere near Asheville for that Christmas time.  Unfortunately for us, however, our plans were thwarted by ‘Snowmageddon 2010’.  This, I think only served to make us more enticed by this little city.

When we began preparations for this summer, we decided that starting off in Asheville might be the easiest transition from NYC to life on the road.  I met a native ‘Ashevillian’ last summer who confirmed all our Internet Research about how the city is not only surrounded by beautiful mountains, but is also inhabited by open-minded, happy people who drink a lot of beer and eat only good food.

Asheville, to put it simply, met and exceeded all of our (super high) expectations.  We stayed in the Asheville area for two full weeks before moving on.  In that time we climbed to some of the prettiest views we’d ever seen, went on amazing trail runs, ate incredible food, and of course, drank great beer at many of the local breweries.

We stayed in a cabin for the first week out in Leicester, North Carolina. (We had the top floor above the garage). 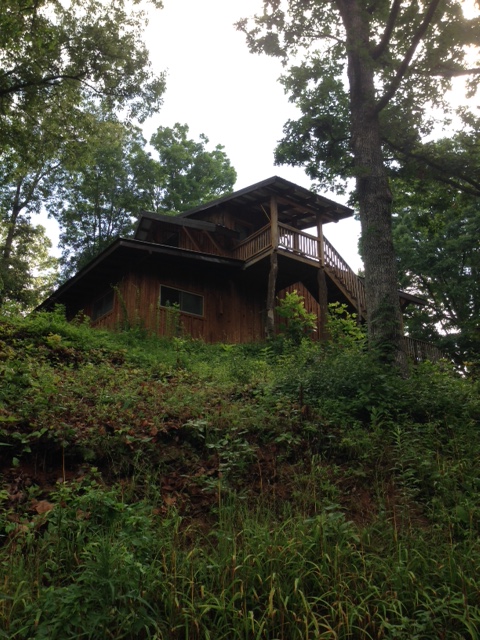 The second week we spent camping at Lake Powhatan, which was right along the beautiful Blue Ridge Parkway.

On July 4th, we hiked out to Skinny Dip Falls to go swimming, but unfortunately it was grey and rainy so we decided not to jump in.  We’re pretty sure Vera was ok with that idea since she associates water only with taking a bath (one of her least favorite things to do). 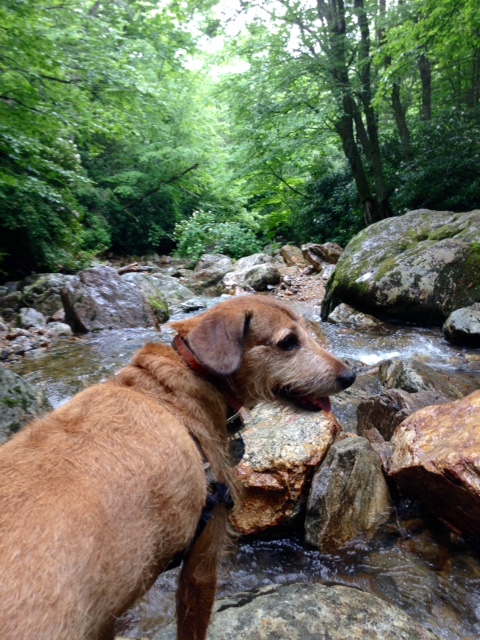 Probably my favorite hike was the morning we climbed to the top of Max Patch, an area on top of a mountain once cleared for a pasture, that offers 360 degree views of the Great Smokey and Black Mountain Ranges. Views for days… 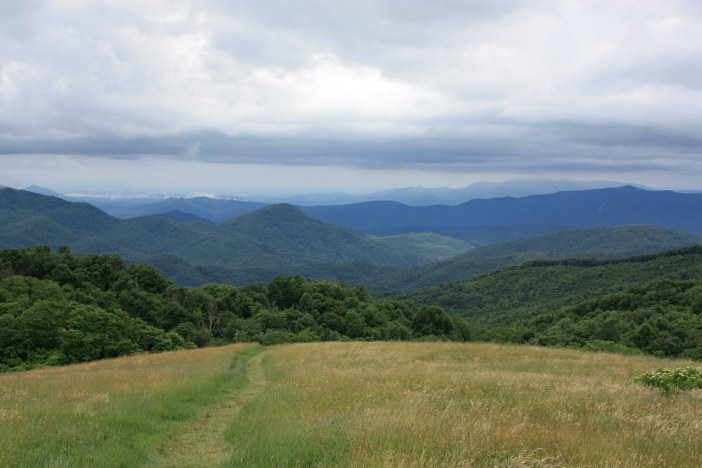 Also, on this hike, we got to see our first ever baby llama. 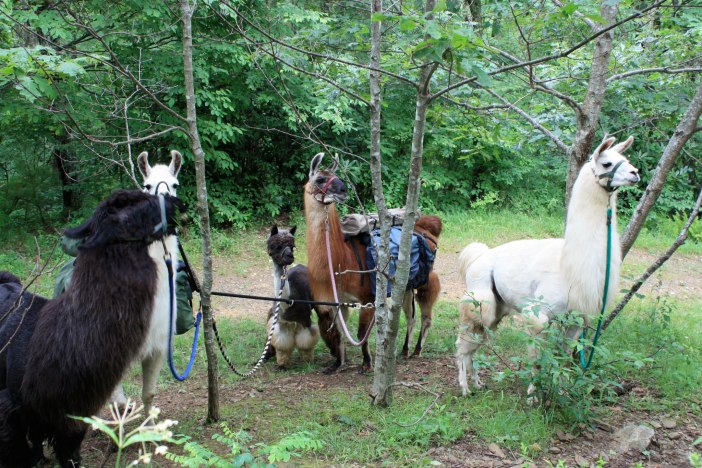 It was definitely hard to say goodbye to the comforts of Asheville, but we were excited about pushing onward to Adam’s most anticipated stop: Chattanooga, Tennessee (of course, his anticipation was based solely on this article from Outside Magazine).