Life has gotten a little crazy all of the sudden- well, at least my ability to get to the computer has been greatly compromised by all of the awesome things we’ve been doing; hence the super long delay between posts.

So where were we? Oh right, Colorado on our way to Utah- Moab to be exact.  About a year ago Adam and I flew into Denver and drove through Utah hitting Arches, Bryce and Zion.  It was probably one of our best trips ever, and Arches was easily one of the prettiest National Parks we’d ever been to (in part due to our early morning sunrise hike, that was so early we were the only two people on the trail and at delicate arch).

Not that the other parks weren’t wonderful, but when it came time to figure out where to go after Colorado, it seemed like an easy decision: Moab Part II.

If I’m honest, I wasn’t really looking forward to this week in the desert heat.  We had a campsite all week, which meant being outside basically every second of the 100 degree days- of course while Vera sat in air-conditioned doggie day cares 🙂  As soon as we pulled into our campsite, however, all of my apprehensions melted away.   Moab is the best.

We started almost every morning with a run through a canyon that lead to a beautiful natural bridge.

After our run, we would go back to town for smoothies at a cute local coffee shop where we would stay while Adam worked and I read and wrote and researched our upcoming destinations.  It would start to get broiling hot around 2pm so we’d head back to the campground for a dip in the pool before picking Vera up for our evening hiking excursions- which mostly turned into drives around the National Park because it was too. damn. hot. to walk around even for a few minutes.

Arches was just as pretty as we remembered, even though we were just doing short drive-by walks.  We decided to leave Vera over night at the doggie daycare, mostly because the lady who runs it is the nicest, but also because we couldn’t really hike any of the National Parks with her (not to mention get out of the heat to go into a restaurant).

Above is the view from one of our Vera-free-night hikes.

One night we decided to take a drive because it was raining- so we went to a ghost town near by (which scared me to death).

Adam wasn’t nearly as scared as I was and bravely walked around, getting a closer look at the place.  It turns out all my fears were for naught and there was nothing to be scared of- but the grey, cloudy skies definitely didn’t help!

By the time we picked Vera up on Friday, we were ready to have her back- we missed her! (Even if she is annoying to sleep with in a super hot, stuffy tent.) We all went on a short hike to Corona Arch, which is probably my favorite hike in the Moab area. 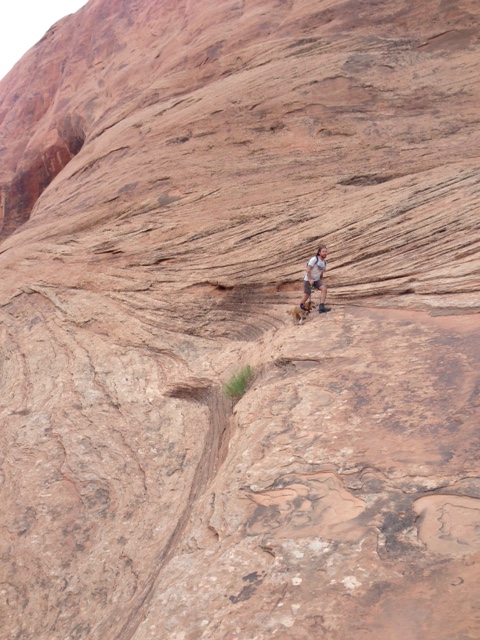 Moab is definitely a town we will be back to visit- there’s something about the energy there.  Everyone seems happy and content and you can’t really beat the landscape.  For all my worrying about the heat, it was actually a little sad to be leaving, though our week in Utah was followed by an awesome week in Yosemite and Lake Tahoe and beyond, so it was hard not to be excited!